A Leetcode problem with a basis in real applications ... go figure

In last weekend's LeetCode Contest, there was an interesting problem that involved finding the fingerprint in a graph. It reminds me of some articles I've read on the topic, so I decided to write up my thoughts and share the solution to the coding challenge.

Fingerprinting is a technique that is used in graph analysis to trace out paths in a network. I encountered this around Personalized PageRank computation techniques. In this scenario, you have a large graph, possibly millions of nodes, and you are interested in the neighborhood of nodes around a query node. Taking a Monte Carlo approach, you can drop a bunch of random walkers (particles) onto the query node and allow them to explore different paths by stepping from one node to the next across the graph edges. Each path that a walker takes is referred to as a fingerprint. The length of the fingerprint will depend on parameters set in the algorithm. In the end, all of the fingerprints can be combined to form a probability distribution over the nodes in the neighborhood of the query node. In the work Fogaras 2004, the authors show how the personalized pagerank of a node can be approximated from the final vertex of thousands of fingerprints. The resulting Personalized PageRank gives a good measure of the items within the neighborhood of interest of a target user and can be used to offer personalized recommendations.

I suspect that the terminology "fingerprint" is borrowed from molecular biology, where fingerprinting is a common strategy used to encode the structure of molecule. The challenge is to formulate a numerical representation of the structure of a molecule that can be used as a similarity measure when comparing molecules. It can also be used as the input to machine learning models. The basic idea is start at one atom in the molecule and make variable-length walks across the bonds until you have traced every substructure within the molecule. Doing this for each atom and combining the results give you a molecular fingerprint that can be easily compared to other molecules.

Every weekend, LeetCode holds a contest where partipants compete globally to solve four newly published coding challenges in 90minutes. The problems generally consist of an easy problem, two medium problems, and one hard problem in terms of difficulty. In the latest contest (Weekly Contest 179), the most difficult problem was a graph analysis challenge where, essentially, you are asked to find the fingerprint. The problem is linked and reproduced below.

The edges of the undirected tree are given in the array edges, where edges[i] = [from i, to i] means there exists an edge connecting directly the vertices from i and to i.

Return the probability that after t seconds the frog is on the vertex target. 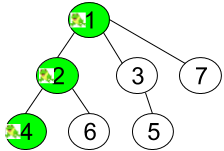 In the example above, the frog starts at node 1 and makes two hops to land on node 4 with a probability of 0.16.

Below I have posted my solution to the problem. The basic idea is to create a graph structure from the edges that are provided as input. Once you have a graph, a recursive depth-first search can be performed until the target node is reached. The tricky part involves tracking the probabilities and time steps during the recursion. Also, there are a few edge cases that need to be handled. In the end, this is very similar to the procedure laid forth in Fogaras 2004 to find the probability of landing on a final vertex using fingerprints.