How it works and why it's awesome

I have been working on a new project called Migrateful, a migration manager for the Contentful platform. As a result, I have developed an appreciation for Contentful's environment system. It leverages the potential of cloud provisioning and offers major advantages. However, it is a bit different from the traditional staging environments that most developers are accustomed. So, it's worth taking a minute to understand how the environment system works and how it can be utilized effectively.

The Contentful system is formed by a hierarchy of Organization -> Space -> Environment. A space is equivalent to a project, and within each space you can have multiple environments. When you first create an empty space, there is a default, master environment where you can start defining your schemas and inserting data.

One more piece of Contentful's environments that deserves explanation is the "alias" system. An alias is used to declare, or tag, an environment for a particular type of usage. For example, it is typical to have a "master" alias that points to your current production environment. Then, promoting a new environment to production is simply a matter of re-aliasing.

I think of aliases as pointers. For those who are familiar with the C-language, an alias is like a persisted variable that "points" to a environment, and can be updated to point to newer ones.

I will use an example of how you can setup and use your environments to bring all these concepts togther and make the most of this system. 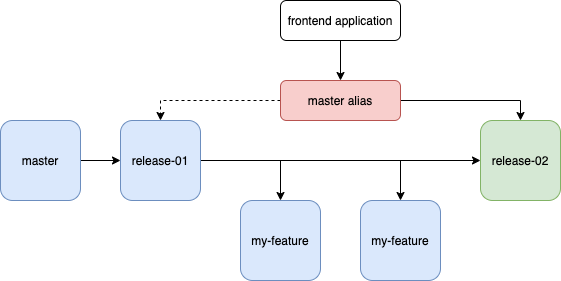 Note how this is different from a the typical engineering environment. Typically you would provision (probably by hand) two environments. One for production and one for staging. These environments would persist forever, and you would deploy new types, data, and features to each one as the system evolves. A massive disadvantage with this approach is that the two environments have a tendency to drift apart. Small differences between the two will go unnoticed during development until at some point when deploying to production and the feature does not behave as it did during development.

It is a massive advantage of cloud systems that we can provision an entirely new environment to look exactly like production (with production data) in less than a minute!

There is a subtle (and important) point to be made here. When I am ready to publish my new feature, there are two approaches to getting these changes into production.

I prefer the second approach because it prevents any accidental changes that were made in the development environment from making it into production. However, this approach requires being able to execute the desired changes reproducably using code that can be automatically applied to environments. This is functionality that I have built using Contentful's migration SDK and packaged into the npm project migrateful. I plan to talk more about this in an upcoming article.